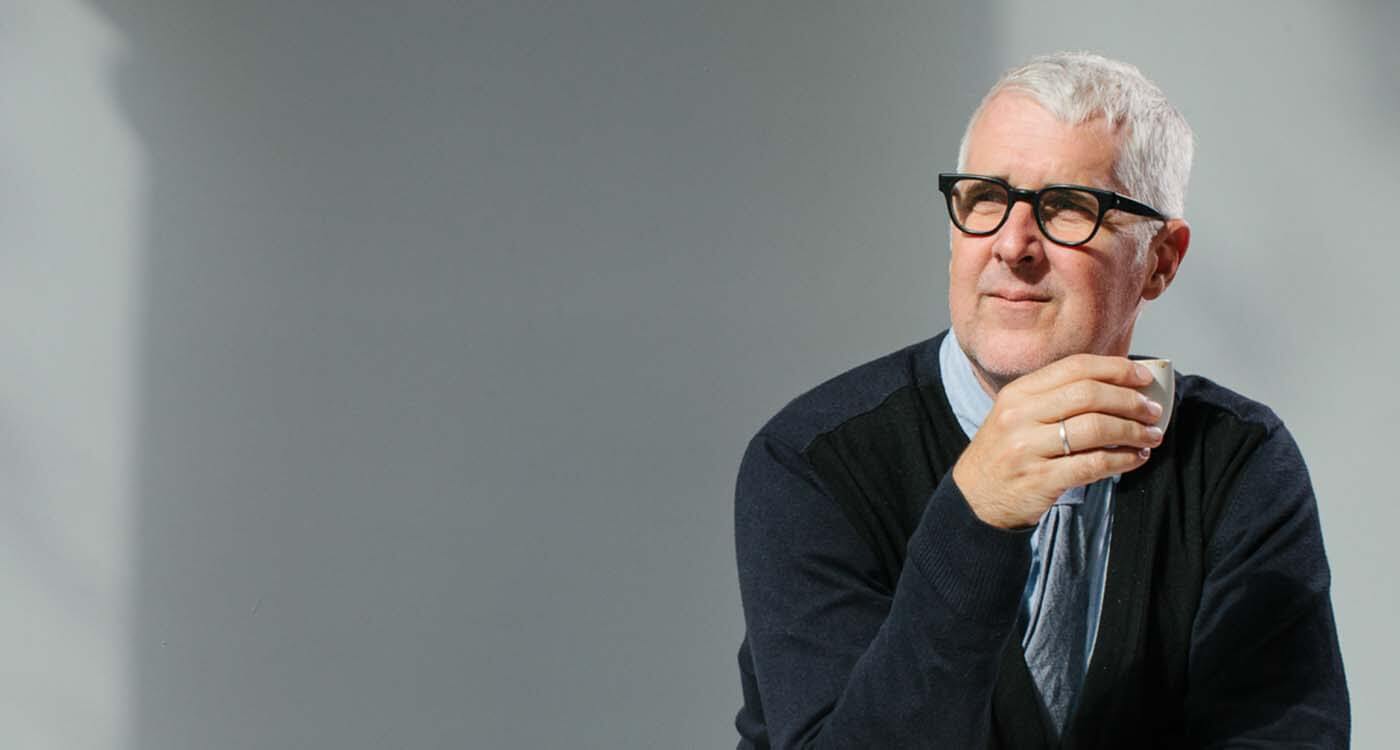 Back to Overview
James Freeman started Blue Bottle Coffee as a side hustle and the company has grown from a single espresso cart to 40 locations around the world today. In this interview, he discusses how he used negative space to create a signature design aesthetic, how Blue Bottle carved out its own space in a crowded industry, and how his previous career as a musician influenced his approach to business.

Look back to San Francisco in August 2002 when James Freeman’s idea to start Blue Bottle Coffee began to take shape. You’ll see an uninspired professional clarinet player who decided to invest $20,000 to turn his hobby of roasting coffee into a business. It began with an espresso cart.

Sixteen years later, Blue Bottle has grown from that one humble coffee cart to 40 locations throughout the United States and Japan. (Last year, Freeman sold 68% of the company for a reported $425 million).

So what does this the coffee business have to with design and craft? Freeman credits many of the skills he learned as a classical musician with helping him to form the identity of Blue Bottle. From the attention he pays to negative space in the physical cafes to the typography on the company products, Freeman created Blue Bottle cafes to be places where minimalist is clean, not cold, and utilitarian exudes a distinctive personality. As Freeman says, “Blue Bottle Coffee is recognizable not so much for what is there, but rather for what is not.”

99U recently spoke with Freeman at Hustlecon to learn about how constraints led to Freeman’s pared-down approach to branding, why the most noticeable design comes from taking things out, and how focusing on the experience of the coffee and the environment has led Blue Bottle to stand out in a crowded field.

Take us back to the beginning. When did you open your first brick and mortar store?

My first seven-day-a-week shop opened January 23rd, 2005. It was a kiosk in Hayes Valley on Linden Street in San Francisco. It’s still there! We made about $300 that day, so there were a few months of not being sure if it was going to work out. We made every drink made to order, and that was very different than what you could get in San Francisco at that time.

How did you identify a need for what you were doing?

I was fascinated by what I was doing as a hobby, and there wasn’t anyone else doing it. I thought there was a decent chance I could make a living out of it, not to the degree it has been successful, but making a living out of it was good enough for me.

Did you have a master plan?

There has never been a master plan!

What were some of the early takeaways when introducing people to a new paradigm for something as normal as coffee?

People at the time couldn’t understand why I was opening a coffee place. There was the feeling that the pinnacle of coffee had arrived with Peet’s Coffee. Starbucks had been coming into town, too. I would get a lot of unhelpful feedback on how much competition there was, and how little chance I had in an environment people were calling “so saturated.” But I just wanted to do what I wanted to do! I wanted to make these very different type of tastes from Peet’s.

The general belief was that Starbucks and Peet’s were luxury products, so why was I charging more than them? There is a phrase: “The normative power of the actual.” You can think that certain coffee that you are used to is the finest and the best, but once you’ve had some different tastes, then those can seem normal. You normalize this new, more expensive, and more time-consuming experience because you like what you are getting from it.

Blue Bottle has a different sense of craft and environment than Peet’s or Starbucks. Was that intentional?

Art is about constraints, right? It started out that I had a cart and a 250-foot kiosk and the freedom that those constraints gave me meant I couldn’t have a lot of extra stuff, so I had to be very pared down. But I also like to live very pared down. I don’t like things arranged on shelves, for example. Shelves are for books or dishes. They are a tool, not a decoration. But after working on 40 cafes now, we mostly think about what shouldn’t be there.

Blue Bottle Coffee is recognizable for what is not there, the negative space. The materials, furniture sets, and countertops can change depending on the region, but what never changes is the purposeful nature of the design. We like to have a variety of seating, but not much in the way of upholstery. It’s rare for us to have patterns, or tiled floors. It means that what takes people’s attention when they walk into our shops is what ought to take their attention, a focus on delicious coffee and a hospitable coffee professional to make it.

All the things you talk about apply to the visual language of Blue Bottle as well, from the logo to the aesthetic production of images on the website.

For a long time I was in charge of every utterance and every image, but now there’s a team that does that and I feel they do a good job of making sure the color palette adheres to a neutral blue/grey that lets the pop of the coffee stand out. There are few words and hopefully the words have impact. The words are friendly and not aloof, and the typography is simple, but not pompous.

What was your strategy for going from coffee cart to corporation?

There was no strategy. When you are moving around 135-pound or 152-pound coffee sacks, typography may seem like a luxury. But if you think about the world, even on a coffee cart, shouldn’t every utterance and every image have some kind of meaning? Shouldn’t they reflect some important goal, even if not in an overt way?

I was always thinking about that. One of the handy things about having a background in musical performance is that it’s about that same through-line. Even the silences between movements have meaning that you want to communicate to an audience. How you take a breath influences how people interpret the emotional tone of what’s to come. It influences how you might play emotionally. That way of thinking was not foreign. Having to pack every possible sense of meaning into silences, as well as sounds, translates quite easily into a confined space such as a sign. What should the words and typography look like? I wasn’t an expert in that, but I was an expert in projecting an emotional tone and meaning from every possible utterance. 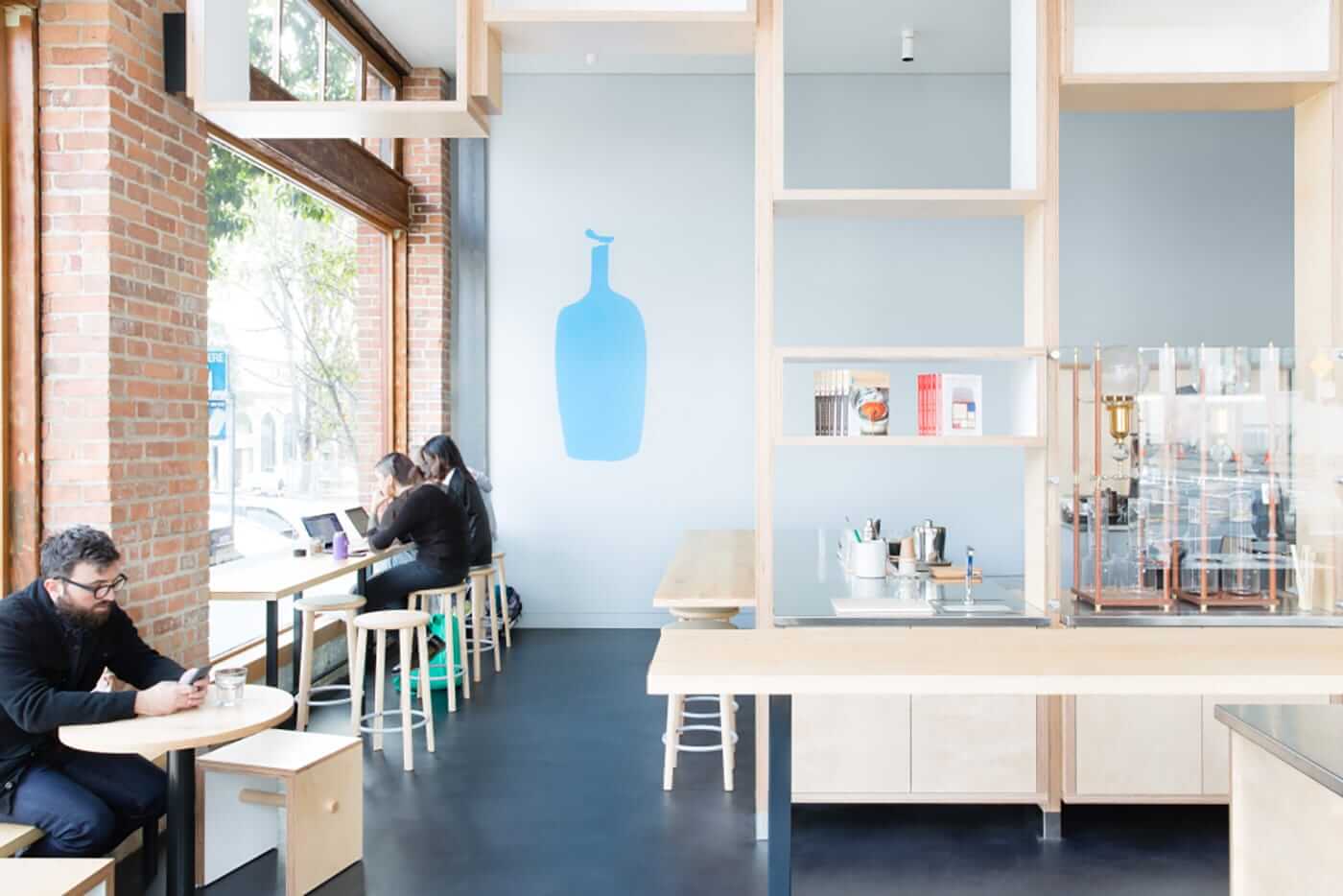 Does this go all the way back to when you had the coffee cart?

It took a few years for me to figure out what the right emotional tone, so I made a lot of mistakes along the way. But I was cognizant of those issues from an early stage. Those mistakes weren’t the end of the world. I would have preferred to not make mistakes, but they happen. Hopefully, you learn from them.

That’s the great thing about coffee: It isn’t an art. I was prone to beating myself up for mistakes with music, and I couldn’t live with them. But coffee isn’t the same. There is no Mozart in coffee. You make a drink, and, if it doesn’t come out the way you want it, you ask your guest if you can make it again. The pressure was off.

What makes a Blue Bottle experience different from going to another coffee shop?

Our goal is to have delicious coffee made by a hospitable coffee professional. So the experience is: “How do we emphasize that and not let other things get in the way?” It’s hard because people tend to think about adding things, and doing more and more and more. Sometimes people can be very additive, and that’s where they struggle. Whereas my struggle the last few years has been where to edit, rather than add. That’s how I like to live. It’s personal.

It seems like you have taken everything step by step.

Yes! Nobody can predict the future, but if you have an MBA you think you can. I didn’t have to sell the vision; I just had to invite people into cafes. I didn’t have to say, “Oh this is what we are trying to make.” Show, don’t tell. That’s how the Nestlé thing happened. Our CEO Bryan Meehan knew somebody at Nestlé and their CEO Mark Schneider wanted to come see Blue Bottle, so Bryan took Mark to our stores in New York. It seemed like a good time to have an alliance with a bigger company. 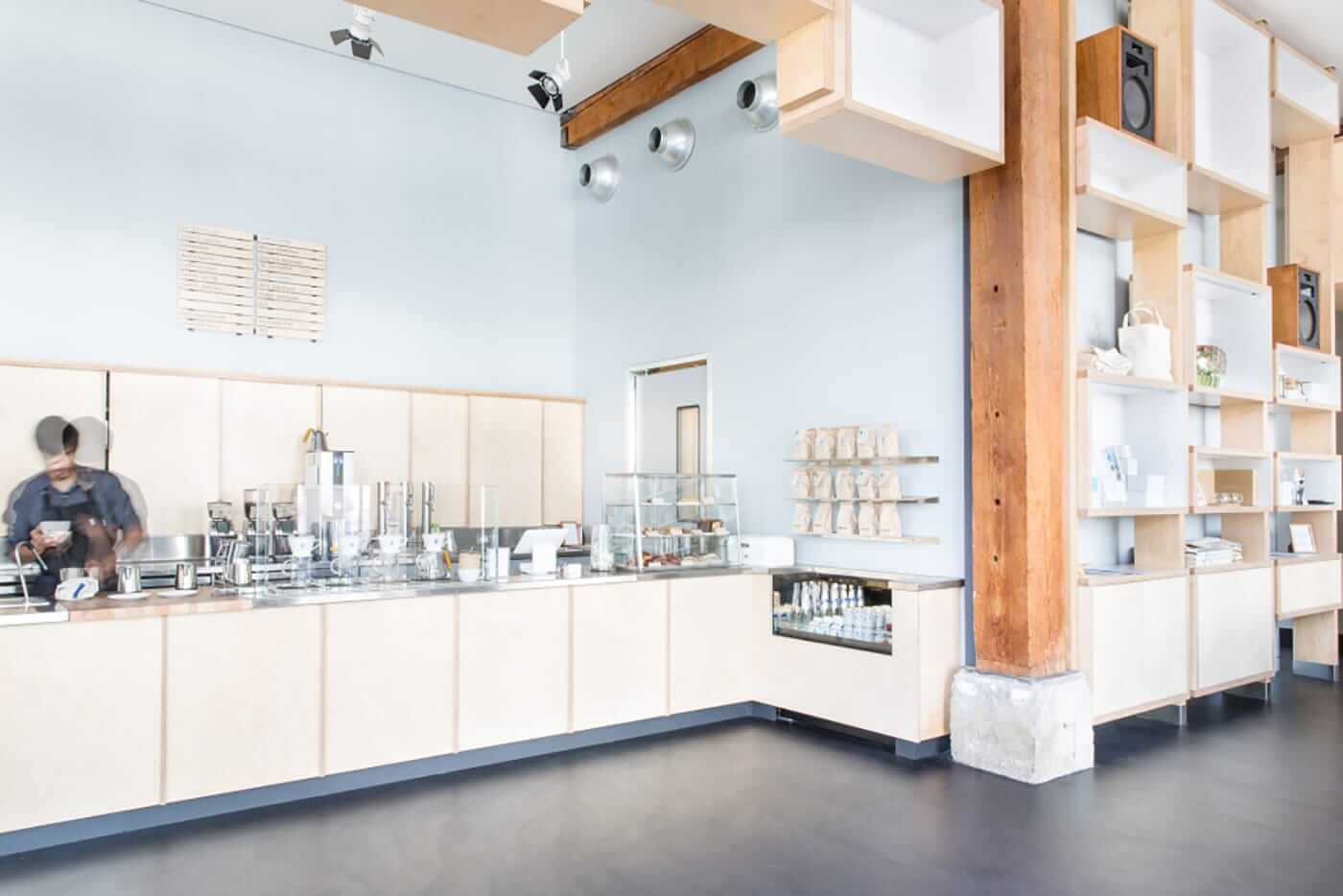 When you formed that alliance, did it accelerate or change your mission, and how did you communicate that within Nestlé?

The main work to be done was to communicate it within Blue Bottle, really. Brian and I flew to every market to talk to our employees. The vast majority of our staff were trusting and the world didn’t end. The coffee still tastes good!

Nestlé is a patient company. They are 151-years-old, and they take a very long view. The challenge hasn’t been with the Nestlé people. Public perception can be solved if we do good work and the baristas are happy. The challenge now for the Blue Bottle team is that they have to demonstrate certain financial markers. I’ve had my tantrums over the years about things that I think are important to the experience too, but that’s my role. I can be unpleasant when it’s called for.

Today I’m more involved with the experience part of the business, but really that’s all I’ve ever been concerned about.

What are you most proud about Blue Bottle?

I think about that little kiosk I started 13 years ago, and I still see a line with people drinking good drinks. It’s in my neighborhood, so I go down there once or twice a week. The first Starbucks is all about Starbucks-ness; it’s like a shrine. I like that mine is still this kiosk, and nothing more than a coffee cart.

I also think about our Tokyo opening with hundreds of people lined up, and I like that we’ve been able to sustain an interest in Japan, and not just be the flavor of the month. We opened in Tokyo because I love Tokyo and its old style coffee culture. I was a student of it. People appreciated that we weren’t coming as conquerors.

Big Spaceship: The Indie Agency That Grew Up With the Internet 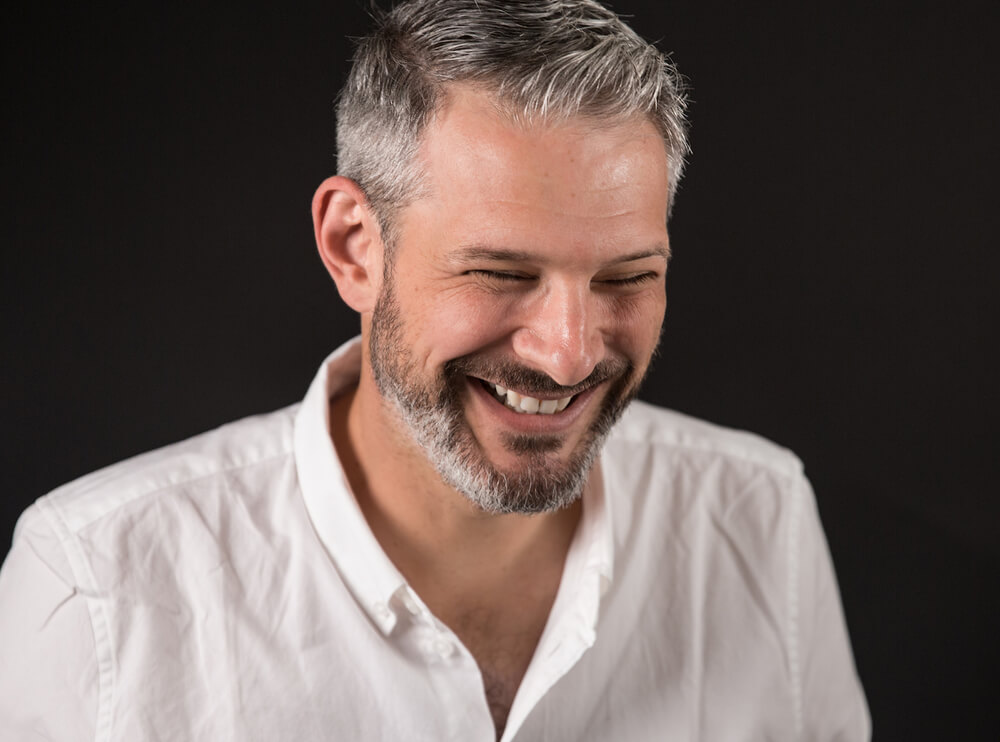