Back to Overview
In addition to liking if you have loved, haha’d, wow’d or expressed that you’re sad or angry on Facebook this month, you can thank Geoff Teehan and his team for that.

In addition to liking if you have loved, haha’d, wow’d or expressed that you’re sad or angry on Facebook this month, you can thank Geoff Teehan and his team for that. This is not the first major project Teehan has tackled to change the internet, from creating one of the first agencies to focus on UX, to creating Medium. The landscape of the internet is constantly changing, and what works one month can be totally obsolete the next. That’s why Geoff Teehan’s long career in the space is instructive.

Some people know Teehan, yes, for his current role as Product Design Director at Facebook. Others recognize the name from the influential Toronto-based design company Teehan+Lax he co-founded back in 2002. Still others may turn in recognition thanks to the iOS mock ups he made back in 2007 that impacted the lives of so many designers at the time.

Despite what his business card says, it is the willingness to share with the design world and beyond that forms his reputation. From the decision to shut down Teehan+Lax in its prime, to his recent blog post on Medium about missing his partner, Jon Lax, Teehan always talks candidly about the challenges presented at each stage of his successful design journey.

We sat down with Teehan to dig a little deeper into the changing landscape of his world, and the lessons he has learned along the way.

You started Teehan+Lax when your previous company closed. What was the growth of the company like for you, personally?

With the exception of one time when we took on four new people at once, the growth always felt really slow — not in a frustrating way, but in a very responsible way. We were very conservative and never paid ourselves that much money. Some of the areas of growth were really enjoyable, such as when you land a good client, but others are really scary, like when you sign a 10-year lease on almost 9000 square feet. Scary moment! And when you grow in numbers—we had more than 50 people at one point—there’s a lot more faces that you are seeing and dealing with on a daily basis and it will hit you at the weirdest times that you are responsible for a lot of people. That can be an enormous pressure. At moments you are incredibly proud of it, and at others you are petrified about fucking up as it’s not just your direct family that will be affected, but it will have a ripple effect out to your employees and their families.

Teehan+Lax evolved from working primarily on advertising to becoming a more product-focused agency. What was the catalyst for that?

We weren’t necessarily as good at creating work to evoke emotion as we were at creating something that “did” something. That was what we were good at, so it was the work that we ended up getting. It got to the point where we thought we were focused too much on the platform side of things. Today it is obvious, but back then we thought we were so insightful when we realized that there are two types of people in digital design – those that wake up and want to work on programs (advertising), and then others that want to work on platforms (developing systems). Back then you did the whole range. We realized we needed to bring people in who wanted to do the “platform” kind of work, so we deliberately ended up with two different teams.

Do you have any advice for someone starting a company in today’s world of design?

You need to find amazing people to work with that you really trust. You are going to be spending more time with these people than anyone else in your life, so make goddamn sure you like each other. It’s easy to get excited about someone who is really talented or fills a gap from an executional standpoint, but if they don’t fit personality-wise or culturally with what you want to build, it isn’t going to be worth it.

You are going to be spending more time with these people than anyone else in your life, so make goddamn sure you like each other.

In 2015 you closed the doors to Teehan+Lax when it was still very successful. Why did you do it, and how hard was the decision?

As a company, we’d always had to reinvent ourselves to stay relevant, impactful, and be differentiated. These are difficult things and take a lot of time. We knew the next level of growth would be very difficult and there were potentially a lot of big changes ahead, and we just didn’t know if we had it in us. We still cared very much about Teehan+Lax, but none of us were interested in the next level of challenges that it was going to offer us. That was just one factor. Another factor was the level of involvement in projects. We probably did about 500 projects during our time with the company, but they are very finite and you give them back at completion. You help clients for a short period of time and then you never really get to see it grow, which I would have enjoyed. We also had our own personal reasons why we were done.

Given where our heads were at and where our passions lie, I think we would have probably ended up driving it into the ground. The company would have needed to grow—because that’s what companies do!—and we would have resisted the change necessary. To quote Jon Lax, it would have been like the sitcom that lasted one or two seasons too long. We were given an opportunity to leave on a high note. The other side of that would have been a lot worse. Ultimately, our personal desires and the desires of the company didn’t align.

Of course it was hard, because there were a lot of people’s jobs that were at stake, so we took the decision pretty seriously. We’d had people looking to buy us previously and we’d always shut it down because we were happy and we were doing the type of work we loved. All we would have got was more capital, but in return we would have become something we wouldn’t have wanted to become. It didn’t feel like a very good exchange of value.

How did you decide on Facebook to continue your career for you and many members of your team?

We wanted to bring as many people as we could with us, and Facebook was by far and away the best choice. There were a lot of opportunities within Facebook—it’s like 50 companies in one. I was most interested in the problems that the News Feed has, so I focused on that. The incredible capabilities of the data and analytics and research here are remarkable. Having that kind of power to inform your design decisions is just amazing, and I’ve never had that before (read about Teehan’s thoughts behind the new “like” button here). For a company of this size, Facebook is really good at empowering people to effect change at any level. I would say it’s light on process and relatively bottom up. A designer, manager, or director here has the ability, at any given moment, to come to the company with an idea that can actually see the light of day. It’s the hacker mentality.

Is there a role for a design leader in that kind of environment, and what is that role?

Yes there is, and I’d describe it as creating the best environment to get the best out of people and help them grow. You are essentially an environment and people builder. You affect product, careers, and process. My job is to make sure the product design is what it needs to be. That means a lot of one-on-one meetings, and providing sound counsel and critique and interfacing with product managers and interface managers. It’s less about executing the design, and more about creating the right environment for it.

You are Product Design Director at one of the most important companies in today’s digital world. How do you go about work/life balance with a role such as that?

Facebook is demanding but totally fair and you get measured on impact here. For me, you don’t have a work life, and you don’t have a personal life: You have a life and it’s all one thing. How do I balance those? I have a to-do list and I prioritize it every single day. On that list is a huge mixture of things and my personal stuff is right in there with my work stuff. I just work at prioritizing, it doesn’t matter if it’s prepping a review for Mark Zuckerberg or paying my rent both have to get done. 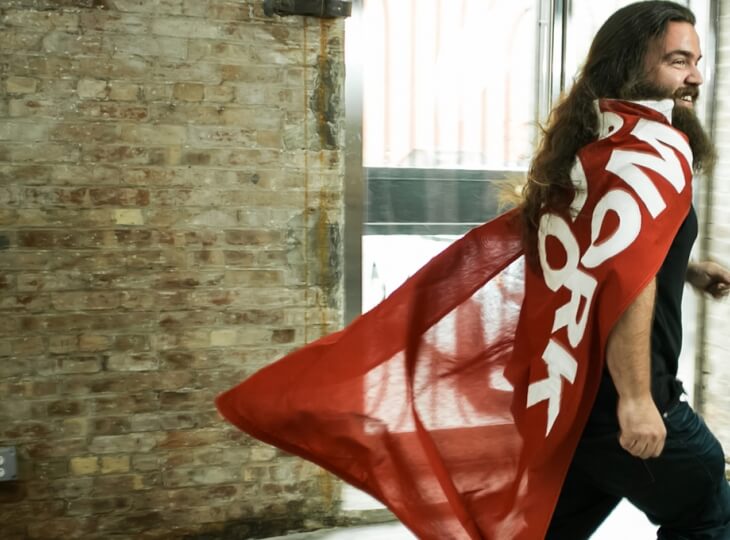