Back to Overview
When Ryan and Tina Essmaker started The Great Discontent, they didn’t have a plan. They just knew it was something they had to do. They have grown their hobby into a business, raised $105,000 on Kickstarter to add a print counterpart to their digital magazine, and most recently, left their full-time jobs to focus on TGD.

When Ryan and Tina Essmaker  started The Great Discontent , they didn’t have a plan. They just knew it was something they had to do.  They have grown their hobby into a business, raised $105,000 on Kickstarter to add a print counterpart to their digital magazine, and most recently, left their full-time jobs to focus on TGD.

DB: You started TGD as a passion project. What were you doing before that?

TE: I had a full-time day job as a social worker and was working with runaway and homeless youth in Michigan.

RE: I had my own little web design studio in Michigan. Tina and I had talked about doing a project like TGD for a long time, though. After a few years of procrastinating and living life, we finally sat down and started the project. It took about six months to get it off the ground, but we did it and have been cranking on it ever since.

DB: Did you start TGD with the intent of it becoming your full-time job?

RE: No, actually. We launched TGD in August 2011 and it remained a side project for us until January 2014. We worked on it in the evenings and on weekends—it was like having a full-time job on top of our day jobs!

DB: How did interviewing designers become your passion?

RE: Even though we’ve interviewed many designers, we’re interested in talking to artists, designers, photographers, musicians—the whole gamut of people who create. We do have many friends in the design community, and they were all wonderfully supportive from the beginning.

TE: As far as our motivation behind interviewing, we started that out of simple curiosity. We were in Michigan and not part of any real creative community, so we wanted to connect with the creative community at large and ask the kinds of questions that would give us insight into people’s beginnings and the risks they’ve taken.

DB: Was making TGD your full-time project the biggest risk you have ever taken?

TE: For me, moving from Michigan where I was born and raised to New York City was a really big risk because all of my family and friends are in Michigan. It was a big deal to leave that for something unknown. The other big risk was definitely leaving my day job to focus on TGD not knowing what it would look like or if we could support ourselves—can we do this full-time in New York City and still pay rent? So far, so good.

RE: I think I look at risk a little differently. If we’re not doing something that’s a bit risky, if we’re not taking chances, then it feels like it’s not worth doing. Doing something safe isn’t interesting to me—it doesn’t make me feel very alive. The question in the back of our minds over the last couple of years has been, “What would it look like if we invested everything into this project?” So we did. I never want to look back and ask, “What if we had done that?”

DB: Do you feel almost like it would be a risk not to do it?

RE: I think we would both be miserable. For me, it would have been a bigger risk not to do it.

DB: Aside from moving to New York, what has been the biggest change in forging this path?

DB: Did either of you go to school for journalism or this line of work at all?

TE: No! I went to school for social work, but I’ve always enjoyed writing, even though I didn’t formally study it.

RE: I finished high school and didn’t look back. I kind of hated school. I was pretty good at it, but I liked—and still like—learning things on my own.

DB: Did you have any key influencers who helped you get into this?

TE: I don’t think so. We both approached this project saying, “Let’s do this thing we want to do,” but we didn’t look to anyone as an influence.

'Let’s do this thing we want to do,' but we didn’t look to anyone as an influence.

DB: What is your process to prepare for an interview?

TE: The biggest amount of research goes into deciding who we want to interview. It’s nice to do some digging to find out if someone has a compelling story that we think might resonate with readers, but we try not to do too much research. I don’t want to know the person’s entire story going into the interview because keeping an element of surprise is important to me. It provides a fun opportunity to explore in the moment.

As far as questions, we do have a standard list that we like to ask. We view it as a study of this cross-section of people who create, and we’re trying to figure out what motivates them while documenting their lives in these long-form interviews.

RE: I think the most important part of our research now is deciding if someone is a good fit for what we are doing. When we started, it was more about people’s work—we interviewed them because we loved their work. But we’ve learned that there needs to be a combination of skill and story.

DB: Do you have a single stand out story that has proven to be the most popular?

RE: Over the past year, the one that has stuck out to me the most was Elle Luna . She was a surprise because we didn’t know much about her beforehand other than knowing that we had some mutual friends. But it turned out to be a really great interview that resonated with many of our readers. People still mention her interview frequently. When someone has a crazy story and is really candid about it, that’s what resonates.

TE: I think our readers want to know that the people we interview are real people. They’re not some unreachable god—they struggle to follow their paths, too.

When someone has a crazy story and is really candid about it, that’s what resonates.

DB: Have your stories had lasting effects on your subjects’ lives?

RE: Many times readers bypass us and reach out directly to the people we’ve interviewed, sending them emails, tweets, etcetera. Our interviewees get a lot of amazing feedback. And we’ve also received notes from people who’ve gotten work after being featured on the site, which is always wonderful to hear.

DB: When you started the Kickstarter campaign, you needed $100,000 for the magazine you were creating. How was that process?

RE: The first couple of days were really exciting because we raised a third of our goal! It was incredible to see people embrace the project right away. A week or so into it, it plateaued.

TE: Running the campaign was an emotional roller coaster!

TE: We did, but we were exhausted at that point. We’d almost given up because we still had over $30,000 to raise in the last 12 hours. Then we hit our goal and had to get to work on making the magazine. It was a whirlwind.

RE: I don’t know if we really appreciated that moment as much as we could have. There was no time to celebrate. The next day we got up and started working on the magazine!

DB: Do you have a regular daily routine?

TE: Right now, we are doing the live/work thing, so I pretty much get up and go straight to my computer. I feel like I should practice yoga or something before work—instead I get up and start going through emails right away. I also try to spend a couple of uninterrupted hours editing each day. Other days I have interviews scheduled in person or over Skype. I also have an intern, so I check in with her throughout the week.

RE: This year has been pretty busy. Adding the magazine on top of the digital publication was more work than we realized it would be.

Adding the magazine on top of the digital publication was more work than we realized it would be.

DB: Do you have a content plan for the next few issues?

RE: Yes, we’ve already made this announcement on our blog, but we’ve re-thought our publishing schedule and decided to do more issues next year: in 2015, we will publish quarterly, so there will be four print issues, which is very exciting.

TE: We’ve had such a good response from our readers and our retailers—there’s just something about print. Of course we’ll continue publishing content digitally, but print has been an exciting venture for us.

DB: Does it feel like you are working against the trend of the publishing industry where long-standing print publications are trying to break into online, but you started with a successful digital publication and are now getting into print magazines?

RE: What’s interesting is that, in many ways, we are trying to solve similar problems as the bigger publications that have been around a long time are. It’s interesting to see that they are running into similar challenges. The thing about digital is that it allows you to grow an audience much faster and more organically than if you were to put an unknown magazine on the shelve. Publishing digitally first allowed us to establish an audience before moving to print.

RE: We do have some more well-known people on our list, but I also think it’s more difficult to get something unique out of higher profile people because everyone knows their stories already.

DB: Could you ever go back to life as employees?

RE: I’ve always had a hard time being an employee!

DB: Do you have any criteria for the risks you take?

RE: If it makes you feel uncomfortable, you have to try it.

If it makes you feel uncomfortable, you have to try it.

DB: If you had to do this over again, what would you do differently?

TE: Things often seem much scarier than they are in reality. If I did this over, I would take risks much sooner.

RE: I would have moved a long, long time ago, and I probably would have waited to do that Kickstarter campaign—we did a lot at once.

Things often seem much scarier than they are in reality. If I did this over, I would take risks much sooner.

DB: Is there a personal or social message that you are trying to convey through your projects?

RE: If anything I would say that it’s to remind others, and ourselves, that it’s really important to pursue the things you feel passionate about. Sometimes those things can turn into full-time careers and sometimes they remain a passion project. But you do it because of the drive inside of you. Personally, it’s a reminder to always be growing and evolving.

DB: Are you creatively satisfied?

RE: Have you read our publication?!

TE: No. I always want to do more and be better. I always want to grow and master new things. I don’t think I’ll ever be creatively satisfied, and I’m okay with that. I’m not tormented about it—I’ve accepted it.

I don’t think I’ll ever be creatively satisfied, and I’m okay with that.

How we solve big problems 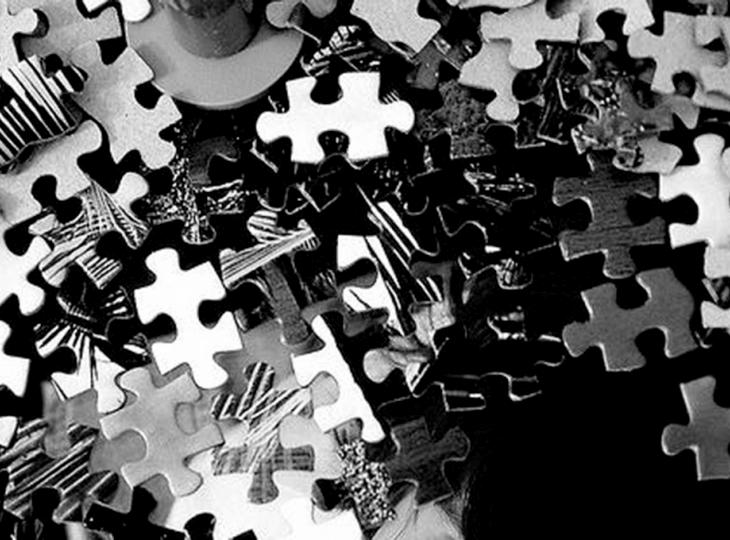