When Brian Flynn started his career in graphic design, not only did the term “graphic design” not exist, but there weren’t even any classes for him to take. He began by making records for his friends’ bands and zines, developing a DIY approach that didn’t stop when he eventually went in-house, designing packaging concepts for big brands like Fossil and then Nike, where he also helped launch the very first Niketown stores.

It was (as you might imagine) a pretty sweet gig, but Flynn ultimately left Nike in order to start Hybrid Design with his wife, Dora, a company they’ve since grown into a talented team of 15 in San Francisco where they solve their clients’ problems with design solutions that range from books and posters to TV spots and interactive installations.

But Hybrid doesn’t take every project that comes through its door, just the ones they know they can execute exceptionally well. Not taking on every bit of new work that comes your way might seem risky for a new studio, but it’s a philosophy that’s paid off with long-term relationships with clients like TED, Mohawk paper, Lego, and a roster of some of the coolest companies on the planet.

How did you come to design?

When I was going through high school in the late 80’s the word “design” didn’t exist in school. When it came time to go to college I just figured I had to go to art school. Computers didn’t exist; it was all hand drawn. The industry was still so heavily centered around advertising that they wanted you to come up with ad concepts and I wasn’t interested in that. So it took a long time to understand what design really was. Back then “design” was an inferior by-product of advertising. I was right at that transition point.

How did you transition from making skateboard logos and punk rock art to starting Hybrid?

The one thing that was great about growing up doing the kind of design I did in high school is that I wasn’t limited to a narrow focus of what I wanted to be. I got a job at Fossil Watches in Texas, where I am from, shortly after it started and immediately was working on a 3D packaging concept. I worked there 15 months and left and moved to Portland to work at Nike in 1995, and that’s where I really got a die-hard education in design. Nike was doing a radical change and was growing so fast that I got thrown into a very sink-or-swim mentality. You had to figure out how it all worked. I worked at Nike five years and then moved to San Francisco to set up on our own. My Wife Dora and I were fortunate enough to leave Nike on great terms and they wanted to continue working with us. We worked out of the house for a couple of years and grew organically, taking on the clients we wanted to take, preferring to stay small than take on shitty clients. It’s easy to get big and get crappy work that pays well, but do you want to spend your day doing that? So we stayed pretty small for a long time, trying to do the kind of work we wanted to do.

Why did you decide to leave Nike and do your own thing?

I think at that point I had worked on so many areas of their design, and like any big company there’s a hierarchical structure that you have to meld with. I’m better being left alone to do the work that needs to be done.

One of our earliest projects was for Upper Playground. It was half a block away from me and I walked by the store every day. They had this really awful logo of a walrus stretched vertically by about 400%. It was just horrendous and I just got sick of looking at it. I finally walked in there and told them I’d re-do the logo. I did that work for free and became very good friends with those people. Since then it’s become a big company and people recognize it, but at the time that wasn’t the case. Fast forward 10 years later and Matt from Upper Playground is the editor of Juxtapoz and if he wants to re-launch the magazine he calls me to re-lay it out.

With almost all our clients they become friends and people you get to know. It’s a thing I talk to students about: Start working with your friends and those people will grow as you do. I knew the Lego guys for six years before I worked with them.

It’s very important to understand that the people you’re working with right now are going to be the people who will be special in 15 years, so start working with them today. You undertake a wide variety of work at Hybrid—for an equally wide range of clients—including TV, digital, outdoor, motion, and print.
The reality is that design is not limited to the medium it’s expressed in. Design is a by-product of the idea. You sit down and think, “What’s the problem I’m trying to solve?” Sometimes the best way you come up with is a toy or a website… Once you’ve got the best idea, figure out how to get it made, and if you don’t know how to do that, go find someone who does. So I can’t be limited in my thought process with a premeditated idea of what something needs to be. I’m always up for learning the next thing and finding out the best answer this time.

You’ve worked with some of the same clients for a number of years. What’s your secret to retaining them?

We have a handful of clients now that we’ve been working with for up to 15 years. It’s unusual to hold onto clients for that long. But here’s the thing: they aren’t clients, they’re friends. I always hear people talking about how clients don’t get it, or that they’re stupid. The moment I hear that I think, “You’re a bad communicator.”

The client has a core business problem that needs fixing. They might think they need a catalog but in reality they’re looking to increase sales. Maybe they need a catalog but maybe they don’t. Your job is to understand their business problem. As designers we have to be less focused on our premeditated ideas of what design should be and really try to understand the problem and find the solution.

Finding the right solution will bring you to the right design.

Don’t get hung up on the aesthetics first before working out the problem solving. That’s our approach, and that’s why 15 years later we still have the same clients calling us.

It sounds like patience has been a big factor in your success, from working with friends in the early days to working towards these big, fun projects that are now coming your way.

If you try and force anything, it never works. Even when we were just working out of the house and only had one client, we were clear that we wouldn’t do work we hated and just settle. The idea of coming to work and doing stuff I don’t want to do doesn’t make sense. I can go and work for someone else and do that. If you don’t have to, then don’t take the “paycheck” jobs, because you’ll get used to the money and the comfort.

There’s no excuse for being unhappy with work. The more you allow yourself to do great work, the more you will get.

Any advice for aspiring designers?

If you could start it over, what would you have done differently? 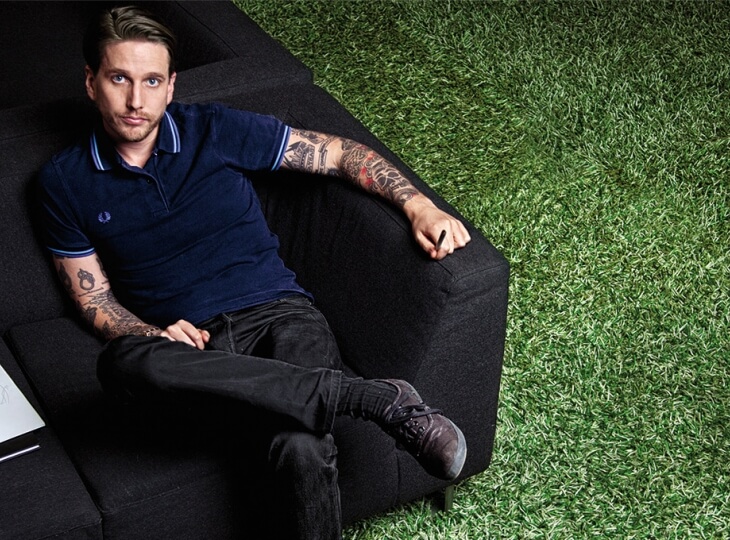